Ubuntu Mainline Kernel Installer is a tool for installing the latest mainline Linux kernel on Ubuntu and Ubuntu based distributions.
"The Linux® kernel is the main component of a Linux operating system (OS) and is the core interface between a computer’s hardware and its processes. It communicates between the 2, managing resources as efficiently as possible." -- Redhat 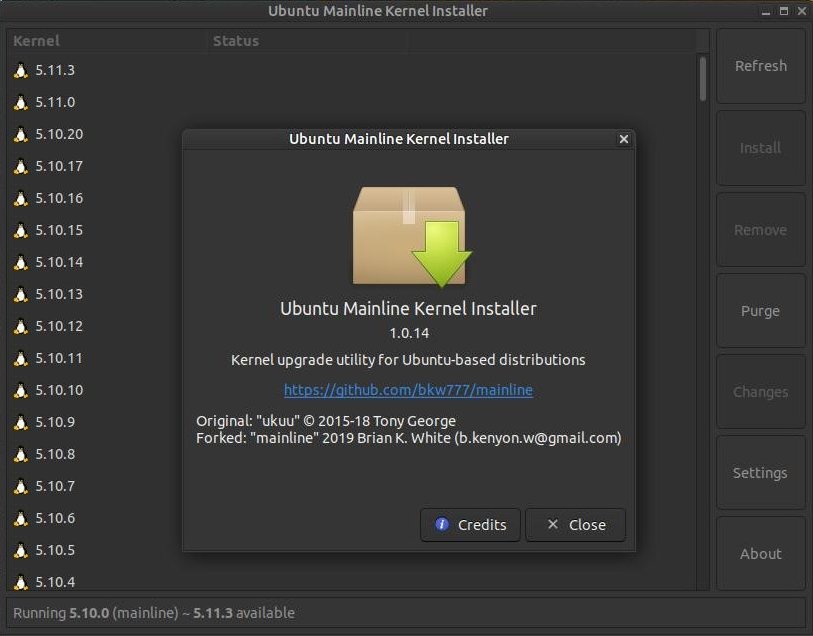 Ubuntu Mainline Kernel Installer is a fork of ukuu. The developer of ukuu no longer supports the free version of the program; it has switched to a paid license for its current and future releases.

I recommend that you stay with your current kernel on your system unless you are having problems with it. A newer kernel does offer some advantages to your Linux system. Here's some reasons to upgrade your kernel to a newer version:
My Ubuntu MATE 20.04 system recently got an update and it upgraded my kernel too. The newer kernel changed my system so that it had a lot of screen tearing and my USB Webcam no longer worked. I ran the command inxi -Gx to see what driver was used for my graphics card. I noticed that my graphics driver had N/A and my OpenGL: renderer: llvmpipe (LLVM 10.0.0 128 bits). The upgraded kernel wiped out my graphics driver, so I needed to install a kernel that would allow me to use the graphics driver for my graphics card. I need to either roll back to my old kernel or look for a newer kernel that would work with my system. 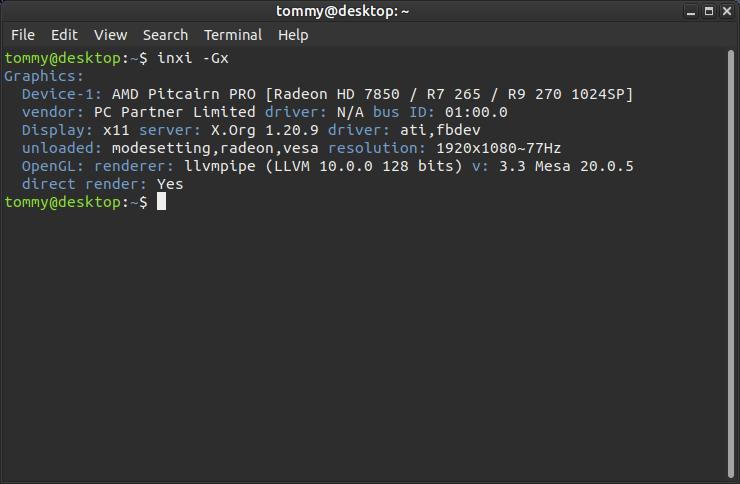 Ubuntu Mainline Kernel Installer found kernel 5.8.0-44.50~20.04 installed on my system. This is the kernel that messed up my system. I selected kernel 5.10.0-051000 to install on my system. I didn't want to go backwards to an older kernel. Sometimes just upgrading your kernel can fix your problem like the person that wrote OpenGL renderer is llvmpipe instead of using my GPU.  I had to install a newer kernel and then follow the instructions from Ubuntu – Getting rid of llvmpipe. Installing open source drivers correctly. 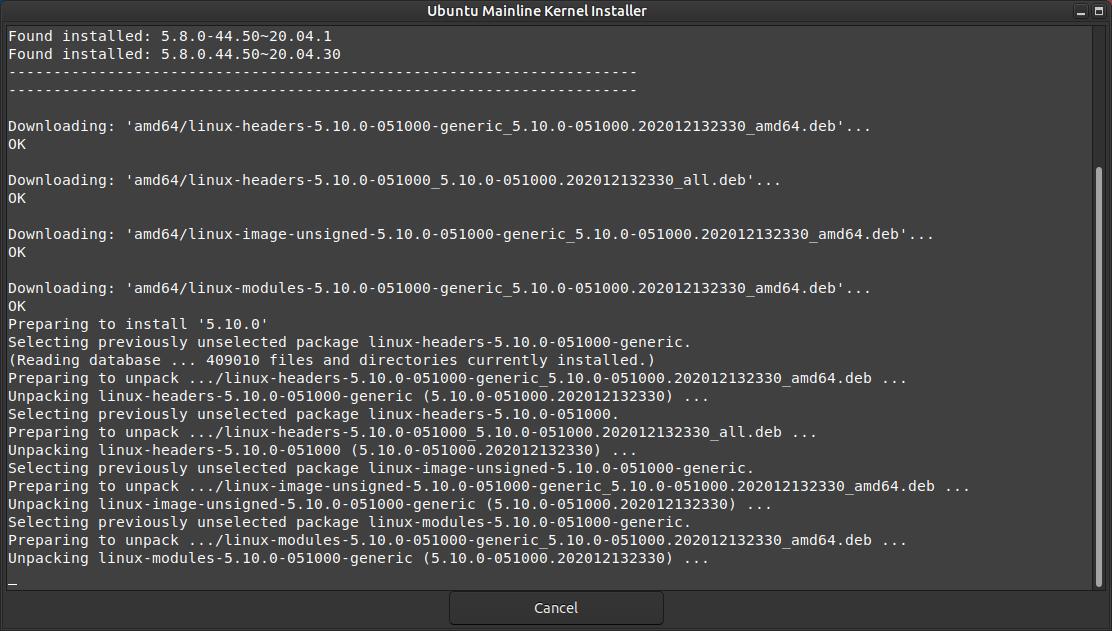 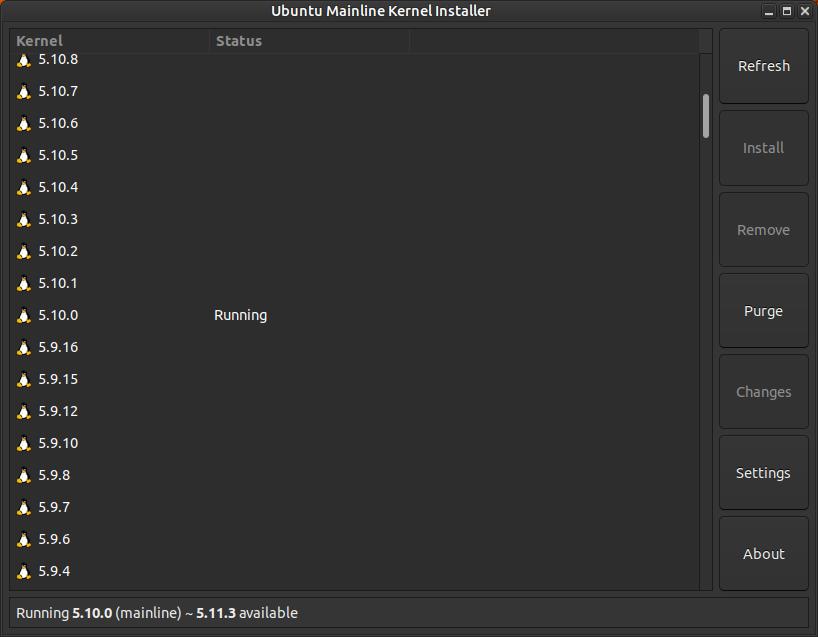 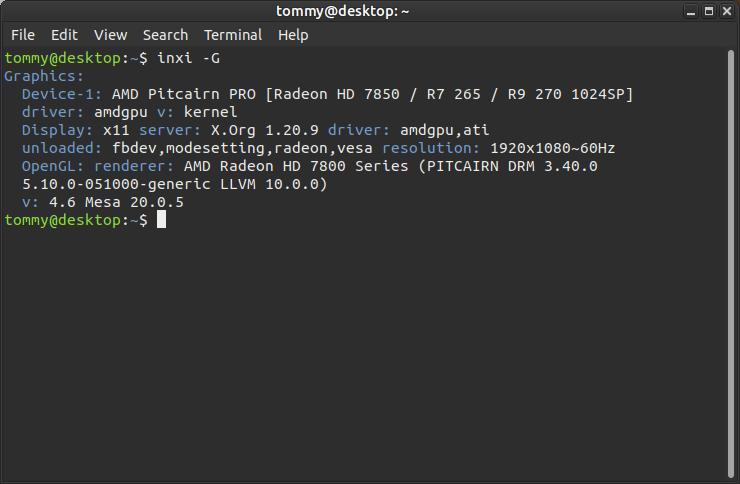 My system is now just as stable as it ever was.
You can see at the time of creating this webpage that the newest kernel is 5.11.3, but I don't recommend that you install it on your system. You can look in the lower left corner to see the active kernel and next to it is the newest kernel available. 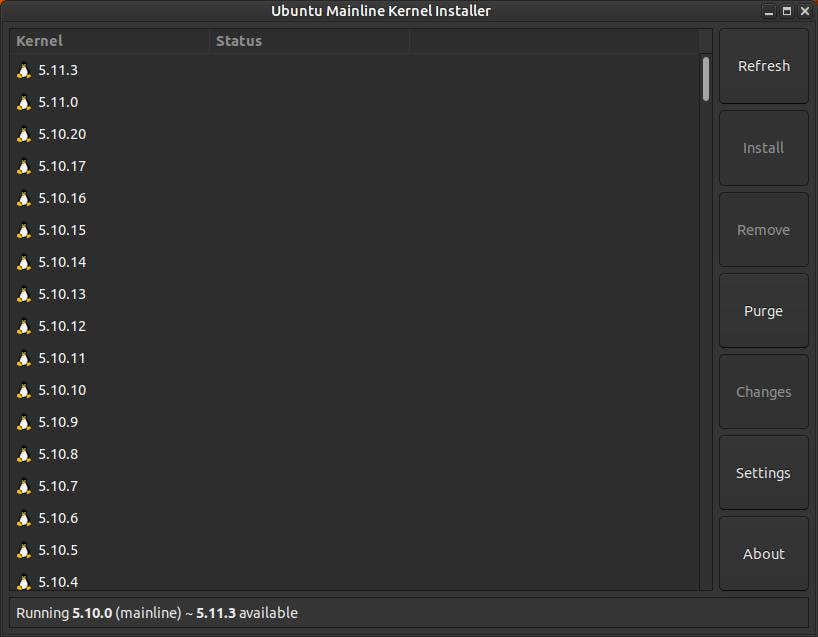 You can hover your mouse pointer over a particular kernel and it will display the packages available or packages needed in order to install that kernel. 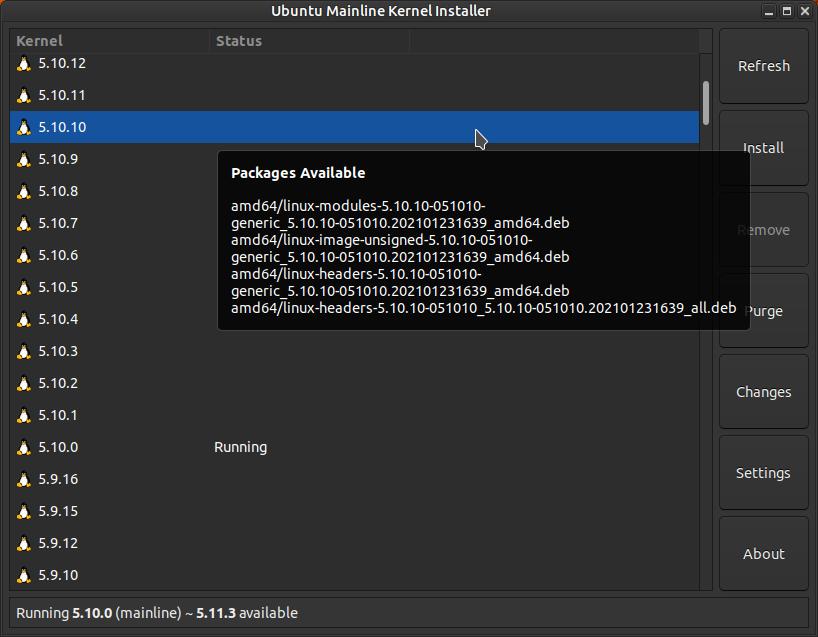 On the right-hand side you will notice seven large buttons: Refresh, Install, Remove, Purge, Changes, Settings, and About.

Here's an example of some of the changes made to kernel 5.10.0. This list was created when I clicked the Changes button. 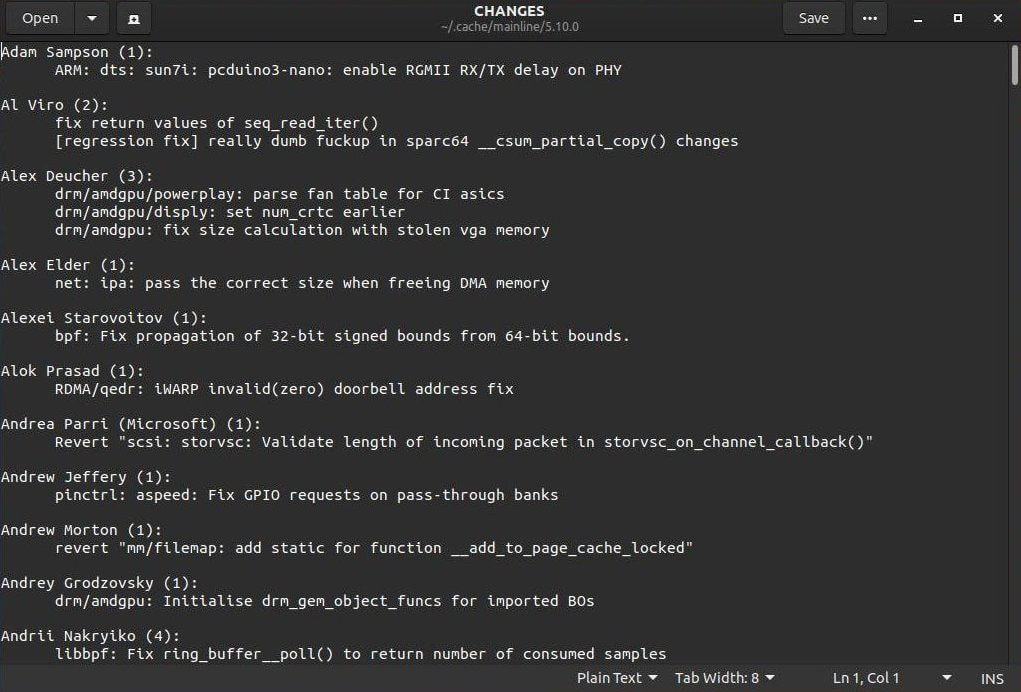 The Remove button will be dim until you click on an installed kernel. You then will be able to remove it from your system. 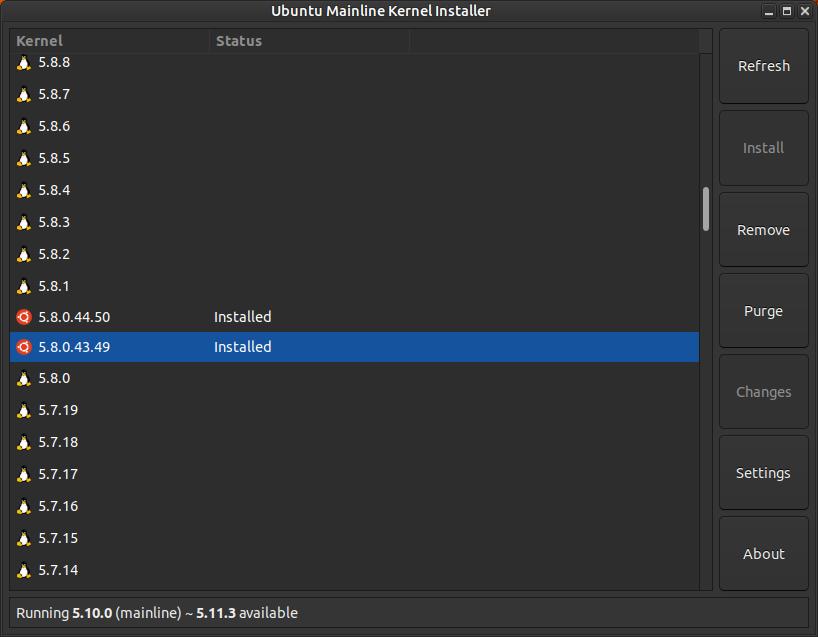 Clicking the Settings button will bring up a Settings dialog box that will allow you change the way the program operates and displays messages. By default, the two check boxes under the Notification section are checked. This will create a pop-up notification on your screen if you have a new major release or point release. I unchecked both of these boxes since I do not use the most current release. You can adjust how often the program checks for a newer kernel. You can uncheck Hide unstable and RC releases, so that you have only stable releases to select from. An RC version stands for Release Candidate. You may see it written as rc1, rc2, rc3, ... If there is a change in rc1, then it becomes an rc2 as the next Release Candidate. Think of these releases as Beta testing stage. You can also have the program to Skip internet connection check and adjust the time and Maximum concurrent downloads. 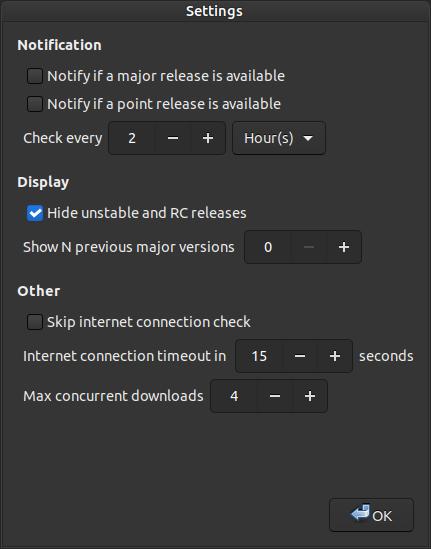 With Ubuntu and Ubuntu derivatives have different kernel variants from Canonical that fall within four categories:  You will notice a variety of variant kernels. (Information from Ubuntu.com)

You can learn more about the Hardware Enablement (HWE) kernel and the General Availability (GA) kernel from my section called How-To Install Hardware Enablement Stack (HWE) on ver. 20.04 LTS.
If your system is working without any problems then I don't recommend that you change your kernel; however, if your system starts behaving strangely or different, then you might want to think about upgrading your kernel. Using Ubuntu Mainline Kernel Installer makes changing your kernel an easy task. I do recommend that you turn on or enable Canonical Livepatch or Livepatch. This will allow your system to install kernel security updates without having to reboot your system. This helps improve the security of your system without impacting your uptime.
Microsoft Windows users also have a kernel within their operating system that controls and coordinates programs and processes. Below are three links to help Windows users understand the difference between a Windows kernel and a Linux kernel.